Back to all posts

There is so much I need to update you all on, it’s a little overwhelming. The first thing you need to know is that I’m eating a fruit-based popsicle, and that it’s really, really cold outside.

If you read my last post, then you know my wife and I have decided to test out working in music full-time. It’s super scary, but also thrilling, and gives us a great reason to do some serious upgrading in a lot of areas. While we have been processing all of this, we have spent a lot of time and energy trying to clarify exactly what it is that Shiny Shiny Black does that’s valuable to other people.

It would be way too intense right now to put that all in one post, but I did think it could be interesting to emphasize one aspect of what we do. I am very lucky to be surrounded by some very creative, motivated people. We love to do stuff, and we love to share how we did it with other people who are interested. So – warning – if you aren’t interested in replacing the pick-ups on your guitar… know that we like doing things like that, and skip to the next blog.

Ok, now that only people who care about changing guitar pick-ups are reading: here we go!

I have been on a quest to achieve a certain guitar sound for a couple years now. You can actually hear the beginnings of it at the end of the last track on the Frequency Theater CD I put out a couple of years ago. Unfortunately that guitar sound was created virtually, I had no amps that sounded anywhere close to that.

Then I saw Luke Doucet from Whitehorse play his amazing Gretsch and I knew I was done for! About two weeks later I bought the first hollow-body guitar with a Bigsby I could find – a used Epiphone Wildkat. A really fun guitar, and a decent price. Unfortunately, the pickups in it are very much in the wrong direction for the sound I am going for, and I have been in a wrestling match with them ever since.

I would love to buy a Gretsch Black Phoenix, but I can’t afford it, even after we sell the family car. (Yep, we’re that serious). I am doing what I can with what I have, so I spent a little bit of money and bought a TV Jones Classic, the same pickup that is in the White Falcon and the Black Phoenix.

Here is the guitar after I removed the strings, with the original pick-up: 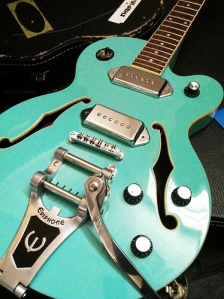 Then, I pulled off the stock pick-up. It actually looks kind of cool underneath: 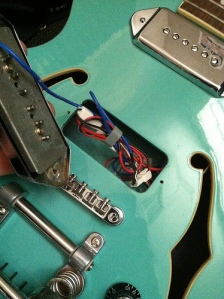 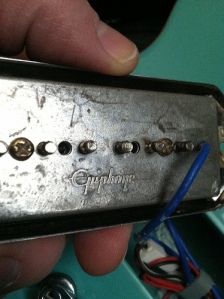 Next, I dropped in my TV Jones Classic, with the “dog-ear” trim ring. I have to say, the TV Jones website was super easy to use, I received my order very quickly (in the middle of the holiday season!), and it fit EXACTLY. I could not have been happier! 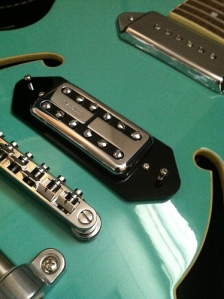 I don’t really use the knobs and switches on guitars, I actually kind of hate them. So instead of fooling with the existing electronics, I skipped them all and went straight to the output jack: 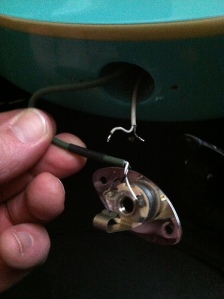 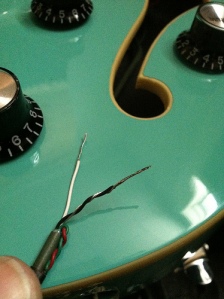 I made a rookie mistake at this point and forgot to find the ground wire that connects the electronics to the string bridge. After I put the entire guitar back together, I had to disassemble it so I could connect it properly. The ground wire was attached to the back of the closes volume knob. I disconnected it, added about  three inches of wire and then connected the ground to the jack. This was actually the hardest part of the whole process! Lesson = learned. 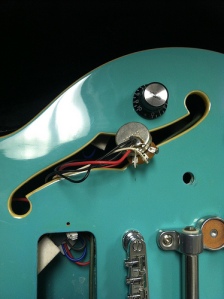 After I got it all put back together, the process went pretty routine. I restrung the guitar, tuned it, intonated it (yeah, it goes out pretty badly with every string change. I can’t wait to fix that!) Then I set the pick-up height. Here is where I got a little creative… TV Jones recommends starting with the pick-ups at 3/16″ below the strings. I didn’t have any tools to measure it with. Then I remembered, guitar cables are often referred to as “quarter-inch” cables, because of the thickness of the connector plug. So I used that to get me close enough, and then used my ears to make the final adjustments. 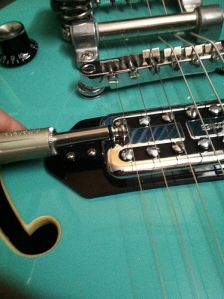 All said and done, my guitar sounds so much better that it’s stunning. It’s still no Black Phoenix, but very wonderful in it’s own right.

Thanks to all the guitar nerds who read this entire thing!